Vegas is a polarizing destination.

Some people really dislike it and I understand why. It’s busy and it’s flashy and it represents the excessive nature of the western world in an uncomfortable (dare I say embarrassing?) way. It’s fun for a short stay, but after being here for three or four days, you start to look around and the city’s mask starts to peel away and reveal its (even) uglier roots: alcohol, sex, drugs, gambling, money, greed. They’re all factors in any city, Vegas just embraces them.

On our last trip here, we were wandering the streets, coming back from visiting with our friend Keith and walking across the overpass into MGM Grand hotel and there was a man, probably about 25 being hustled by another, bigger man, maybe 35. It became evident quickly that the seller was offering the potential buyer a trip to an off-strip brothel and that they’d drive him there in his car. I felt a lot of things in my proximity to that transaction (I’m pretty sure the guy went) and the most prominent feeling was concern over his safety. I mean that’s really risky behaviour all to get laid. I laugh at the young Carly who once argued that men and women are the same. Men and women are NOT the same and I doubt a woman would get into a stranger’s car for the purpose of traveling away from a familiar area just to find someone to have sex with. (Prostitutes are in a similar position all the time, I recognize, but that’s a little different and I have feelings about that scenario, too.)

For me, I’ve learned to put away my sensibilities when I’m in Vegas and just enjoy the experience. Suspend reality. Yes, it’s excessive. Yes, it’s totally ridiculous. Yes, it’s over the top. But 39.01 million visitors (that’s a 2017 stat, down from 42.9 million in the record year of 2016) seem to thinks it’s okay.

I am one of those people. I like the weather, I like the opportunities for things to do. I like the many options for food. I like walking around and just seeing what’s going on, but all this is written as a preamble to what I really want to say, my one complaint:

WHY CAN’T THERE BE A DAMN TARGET IN THIS PLACE??

I wasn’t mentally prepared for this trip andI packed, as I told Yvonne last night, “like an idiot. I basically hate everything I packed.” I would kill to be able to walk into Target and just pick up four things: a pair of capris, a skirt and two t-shirts. Everything in any store around here says LAS VEGAS, many in not so attractive ways. (I bought one of those ones for the half marathon on Sunday – bedazzled, even!) I’ll keep looking today, but I don’t have high expectations.

Now that KronosWorks is over for another year, our minds have turned to our upcoming Rock ‘n’ Roll marathon events. On Saturday, we’re scheduled to do the 5k race and on Sunday, the half marathon. Unfortunately, the timing may be a little off for Kevin. He had a setback related to his hip a few weeks before we left home. The Treasure Run was really hard for him and he was at the chiropractor, at the pool and at physio nearly every day between that event and our departure. He isn’t sure if he’ll be able to follow through with any of his races this weekend, but we’ll see.

Running us a funny thing and what so many people don’t realize is that the majority of it is mental. I’m very accustomed to running with Kevin. Even though we almost never finish a race together, we almost always start it together and that’s how I’d pictured these races. Now, I’m adjusting my expectations to remove him from them. I’ll be fine, I’m sure, but I’m glad I had a head start this time unlike last year.

On day four in Vegas, I was still immersed in conference learning and networking. For the first time, I went to the breakfast and got something to eat before the day started. It was standard breakfast fare: fruit, scrambled eggs, bacon, oatmeal. You’ll notice I didn’t say hash browns because when I got to that tray, it was empty and that was a tragedy. I was introduced to some great people over breakfast and we had an interesting discussion about equality vs fairness, prompted by an exchange that occurred in John‘s presentation on Monday. It was a fascinating debate and the kind when you sit back in your chair and think, “I need to bring more people like this into my life.”

We moved from there into a session on labour strategy. Still as a group, we grazed the morning break coffee/tea and snack tables and all agreed that the coconut water was a highlight. From there we split up and John and I went and hid out on a quiet lounge area in the conference centre while he worked and I did some research. We got to catch up and chat a little more than we have over the rest of the week.

We got to-go lunches before leaving the conference and I headed back to my room to change and prepare for the remainder of the day. Finally, I was able to spend some time exploring with Kevin! 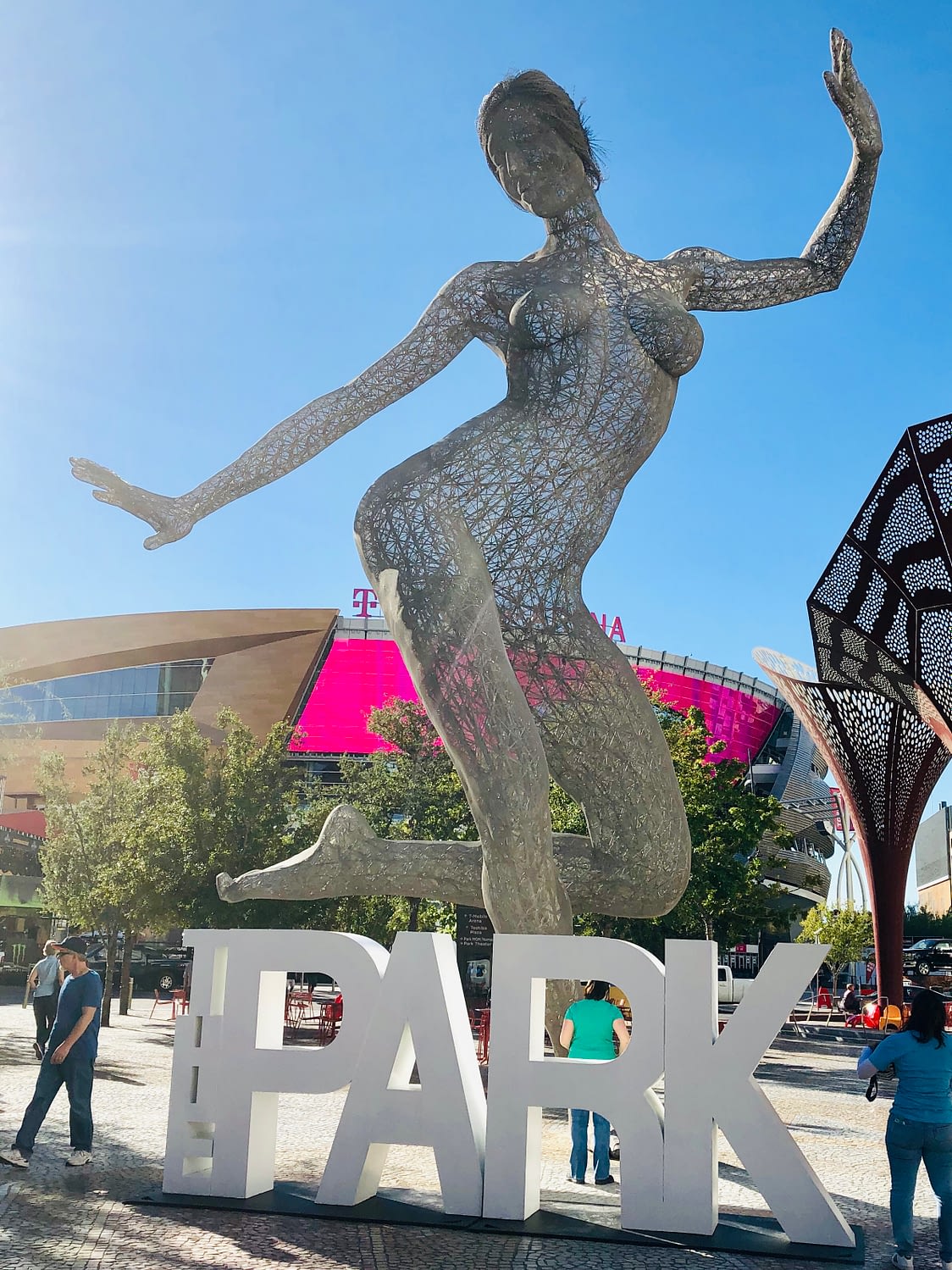 Unfortunately, due to his injury and my exhaustion, it was a little limited, but we still had a good time getting around the hotels below ours on The Strip: Park MGM, New York New York, Excalibur, The Luxor, Mandalay Bay. We did some shopping, played some slot machines, got some sun. This trip began transitioning nicely from work to vacation.

We came back to our room and rested up for the dinner that we’d agreed upon: the buffet here at our home base hotel, Aria Resort.

I love buffets. I’ve rattled on about my need for variety in every aspect of life so this shouldn’t be a surprise. I don’t love buffets so much for the all you can eat aspect. I love buffets because I can try five different things on my plate instead of just one or two.

The Aria buffet is quite good. The quality seemed high and the presentation was surprisingly nice. They had broken the food into sections: Asian, Italian, Latin, tandoori, diner, rotisserie, seafood and salad plus a pretty decent sweets section on top of that. I had mostly seafood and bits and pieces from all the other areas. My favourite things? The crab, the guacamole and, I know this will sound crazy, but the fresh watermelon juice was out of this world. We did one pass over dessert and everything we selected was pretty good.

On one final note, yesterday marked Diwali. May this Diwali bring you happiness and prosperity. May Goddess Lakshmi bless you and give you strength to achieve success in whatever you do!