Top Posts
23 for 2023: things we’ll do this year
What should I focus on on in 2023?...
Milk Fed
My Happiness Project: February
Be your own historian
Post-vacation blues
Bad habits
Home alone
What’s going on in your community?
Quick turnaround
Home TDTFYH 12.06.18
TDTFYH

An actual text I received yesterday:

So maybe I’m an asshole, but I find this so gross and self serving. Community facebook groups where people post about their good deeds. Like what ever happened to just doing nice things and NOT broadcasting it?

I think if you’re anywhere online, you’ve probably noticed this. People buying coffee for the next person in line, helping someone in need, cleaning a neighbour’s sidewalk, whatever…then telling everyone about it. The acts themselves, laudable, but the brag-posting and the selfie-taking as proof to the whole wide world that they’ve been done, cringe-worthy.

My friend backed it up with screenshots of Facebook posts just begging for praise. One even included someone’s dashboard cam video while they paid for an order behind them in a drive through, complete with, “well, that wasn’t much, womp womp” commentary. (“I am SO generous, Facebook, that I would have been more satisfied with spending A LOT MORE on that person’s order.”)

Even before I got this text, I’d been contemplating the same theme in relation to my December motto to spread good cheer. While I knew that I wanted to do it, I struggled with how I could prove that I did and/or if I had to. Posting my daily deeds seemed icky, so maybe a monthly recap? My purpose wasn’t to seek acknowledgement, but to reap the personal satisfaction of doing my best to share the spirit of the season. I wanted to flex my kindness muscle, not flaunt it. 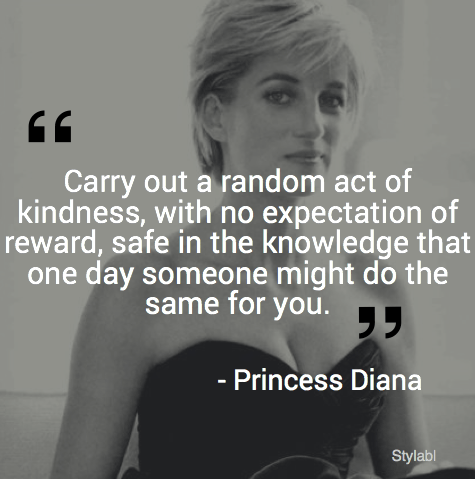 We aren’t the only ones, I suppose. This behaviour is being modelled by celebrities and brands almost constantly. A recent example I can think of is seeing the founder of Tom’s on The Tonight Show, announcing that his company would make a significant donation toward ending gun violence. In the monkey see, monkey do culture we live in, perhaps it’s to be expected, but it seems an ugly side of humanity to me. And $5 million dollars is a bigger deal than a coffee and perhaps it deserves some publicity, though, at its root, it’s still gross. I mean, they could donate the money without taking the opportunity to inspire people to support the brand because of it…

When we do what some of us call “The Silent Work” we participate in gratitude and soak in the karma of giving, serving and loving that most of us are not even thinking of a reward or a reciprocation.

The one benefit, of course, is that it could set an example for others to do the same. Maybe it sparks an idea in someone, maybe it inspires a recipient to pay it forward or an onlooker to mimic the behaviour towards someone else. Surely, we do see enough need in the world and encounter enough examples to give back if we were interested in doing so. So, what’s the benefit of making sure everyone knows that you did something nice? Why does it matter if strangers and acquaintances know you thought of someone other than yourself for once?

Why does the need to be acknowledged for doing something charitable supersede the satisfaction of serving another human being? Does a meal served to a homeless person not nourish if nobody sees that you’ve done it? Can you exemplify kindness without telling others about it? If you’re someone who does broadcast their good deeds, enlighten me. I’d love to understand what I’m missing.