My formal running plans for 2018 have been completed. All that’s left is any training or leisure runs I decide to do. While the temperature is still above zero, I’m going to take advantage of not being super freaked out about slippery surfaces and the kind of weather I love to run in: rainy and cold.

Truth be told, we weren’t as dedicated to running in 2018 as we were the year before, but we did take part in some decent events and we had a lot of fun along the way. When I went through my medals the other day, the list wasn’t nearly as long as it felt, BUT I ran in 11 organized events in one Canadian province and four US states – WA, IL, NV & TX. I earned 13 medals with three more on their way to me now. 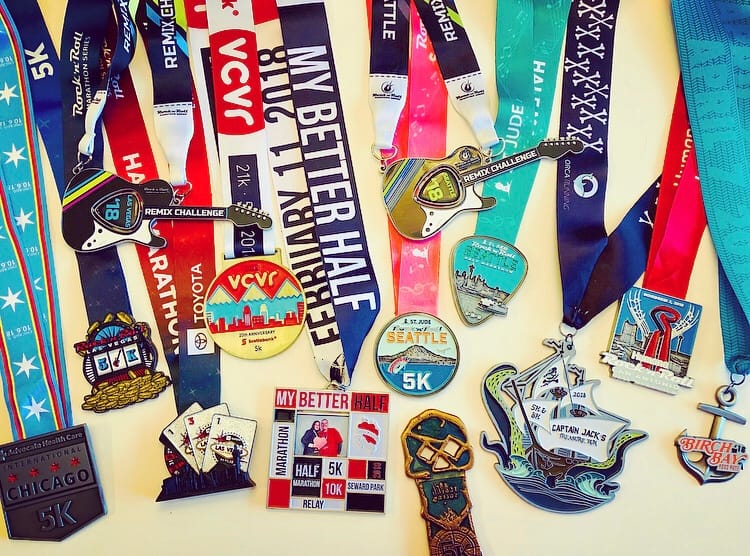 I’ve already sung the praises of Orca Running back when I wrote about the Treasure Run in October, but I’ll say it again: they’re the best. The organization and the races.

As we reviewed our medals and talked through our races, I decided to categorize some of the best and the worst.

Favourite event: My Better Half. It’s a Valentine’s Day race. They had an oatmeal bar at the finish line. And a photo booth. What’s not to love?

Favourite medal: Captain Jack’s Treasure Run. Another all around great Orca Running event. This medal was big, but also beautiful.

Most meaningful race: Rock ‘n’ Roll San Antonio Half. My first solo run at that distance and I felt really good and strong and proud.

Event I’d love to do again: All the Orca events (My Better Half, Birch Bay Road Race, Captain Jack’s) and RnR San Antonio.

Event I’d never do again: Goonies 5k or anything from Virtual Pace Series. Virtual events can be a lot of fun. There’s an opportunity to pull off some great community vibes – Hogwarts Running Club does a great job. VPS just sends you a medal and calls it a day, though not before emailing you every single day to try to sell you on another virtual race. In truth, it’s a total cash grab and you’re just ordering a medal online. If it’s your thing, that’s cool. It just isn’t mine.

Least favourite event: Scotiabank 5k. The course was ridiculously crowded because it was super narrow. There was nothing fun about that. (For the record, I would consider the Scotiabank Half – I’ve heard good things about that.)

What were your favourite races of 2018? Which ones are glad are in the books?