So, here’s a relationship dynamic of ours: Kevin? He loves movies. Me? Meh. He likes to go to the theatre every week. I use movies as background noise while I write. I meet him part way by going to see shows with him semi-regularly. He appeases me by going alone more often than not.

This isn’t the only way in which our opinions differ. While we were watching the previews last night, I thought it would be fun to compare notes more thoroughly and since he has talked about writing movie reviews in the past, this would be a great opportunity to do both.

And an idea was born…

Here’s the second edition of movie review segment that I’m calling She said, he said.

We started this back in March 2017 and that intro is borrowed straight from the first post, a review that we did for the movie Logan. Here’s a link to it.

For our second movie, we’re going to talk about Aquaman which we saw a few days ago at the Silvercity in Coquitlam. Before we get started, a few words on that theater we went to. Locals will remember that it was once the shining star in the fleet of local theaters. People flocked there to see a film in luxury, waiting in longer lineups and braving more risk of sellouts because of its popularity. Well, friends, how the mighty have fallen. We went over there because Cineplex still holds the market on movie gift cards and we had a few that we needed to spend. Since we now live above the Landmark Cinemas here in New West and the movies there are cheaper and the seats there are more comfortable and the popcorn there is much tastier, well, why would we go anywhere else? It’s also raised our expectations in a theatre. At Silvercity, our feet *literally* stuck to the floor in front of the concession. Although the staff we dealt with at the ticket counter and the ticket taker were lovely and customer focused, the girl selling popcorn was a total dud, the theatre seemed understaffed and the system of moving people was clogged and annoying.

I’m going to start with this because I thought it a number of times while we sat in the theatre on Christmas Eve: the fact that we ever bought the idea of Vinnie Chase as Aquaman? Pfft. It would have been a tragedy. And I’m an Adrian Grenier – AND a bigger Vince Chase – fan. (I’m also not the only one who thought about this.)

Literally everything I knew about Aquaman came from Entourage, but a movie being released the week before Christmas? It’s got to have some chops so I agreed to go and check it out. Cara had also been coaching me for well over a year about this Aquaman, Jason Momoa and, well, I took the bait.

The film began with a woman (Nicole Kidman) washing ashore in a storm and the story of her being transitioned from her undersea life as the Queen of Atlantis to her chosen life with the lighthouse keeper who found her and later their son. Spoiler: he is Aquaman.

I loved the ass-kicking introduction we got to Atlanna. Appearing somewhat frail and meek at first glance, we see a fight scene centred around her very early on and she kills it. She also has to give up her life on earth, mainly her husband and her son. 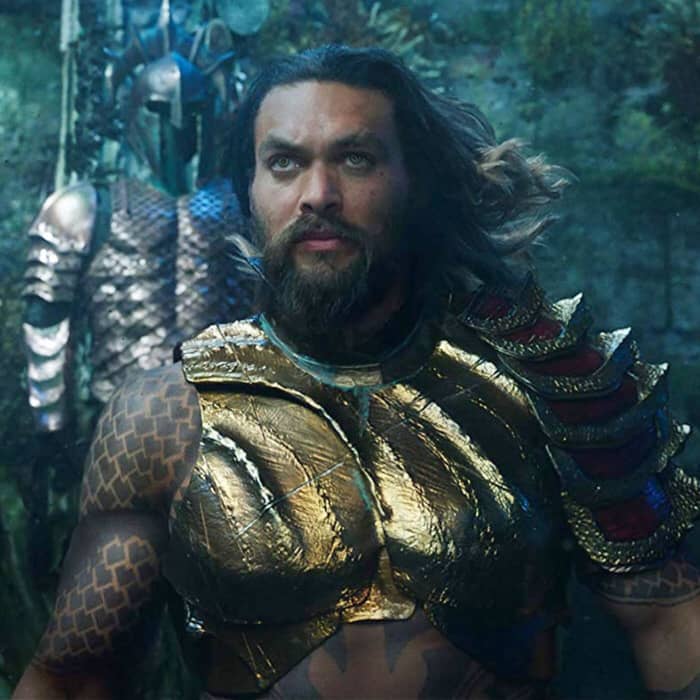 There’s a lot of emotional drama at play at the beginning and throughout the film: of family ties, brotherhood, betrayal, abandonment, it’s all there. That highly charged emotional tone makes the lighthearted dialogue throughout the film even more puzzling. Aquaman’s first two lines are, in a word, AWFUL and they kind of undermined Arthur/Aquaman’s depth throughout the entire show. He acted like a relatively smart and put together dude, but when he opened his mouth he seemed kind of like a dummy. And that was a shame.

So, as an adult, Arthur has been living a hard life. Protecting the sea by day and presumably boozing pretty hard and not giving a shit by night. Until one night he is confronted by Mera (a superbly well-rounded and smart character played by Amber Heard) who is from the sea and claims that Aquaman, as the son of the Queen is really needed AND SHE MEANS IT THIS TIME. A crazy and perfectly timed storm over the ocean helps convince him and he finally agrees to go with her.

Basically, Aquaman’s ill-intentioned half brother is rallying the leaders of the ocean factions in hopes of becoming Ocean Master and the only chance they have of stopping him is if his older brother steps in and the key way for Aquaman to defeat Orm is for him to gain possession of the Trident of Atlann, which belonged to the first King of Atlantis.

Aquaman and Mera travel to the Sahara Desert and later to Sicily in search of the trident before returning to the sea. There is an action filled finale which also includes more of the emotional drama – falling in love, reunion. I actually did tear up at one point so it is legit and it isn’t as scripted as in some films.

At two hours and 22 minutes runtime, it was a little long and, more notably, based on what the viewers saw, it was a little more drawn out than probably necessary. The underwater scenes were, however, delightful. The costumes and the props were pleasing to look at and the creatures were fascinating. We saw it in 3D and they made good use of opportunities to dazzle with fish and bubbles and one particular scene of people diving off a cliff.

This gave us a little of a background story of Aquaman but could not be a true origin story due to him already appearing in the Justice League movie. It did help fill in some of the gaps with information that Justice League left out. It also contained some contradictions, for example: he wore armour in Justice League, but wore none in Aquaman. I also thought he was in Atlantis already when he fought Steppenwolf, but the film details his return there.

Jason Momoa did a good job of playing Aquaman. I liked the fact that he isn’t the clean cut superhero that we’re used to seeing. He drinks and lives life like everyone else. His storyline was decent and fluid and mainly about becoming the Master of the Sea. The trailers made it out that the Black Manta was going to be the main villain be really it was his brother. The introduction to the Manta character set up a return for him and future Aquaman movies.

Compared to other DC movies this movie is very good – it’s no Wonder Woman but it’s very close.

On a scale of one to five, bad to good, Justice League to Black Panther, I give it a 4.