There are a few things to cover today. 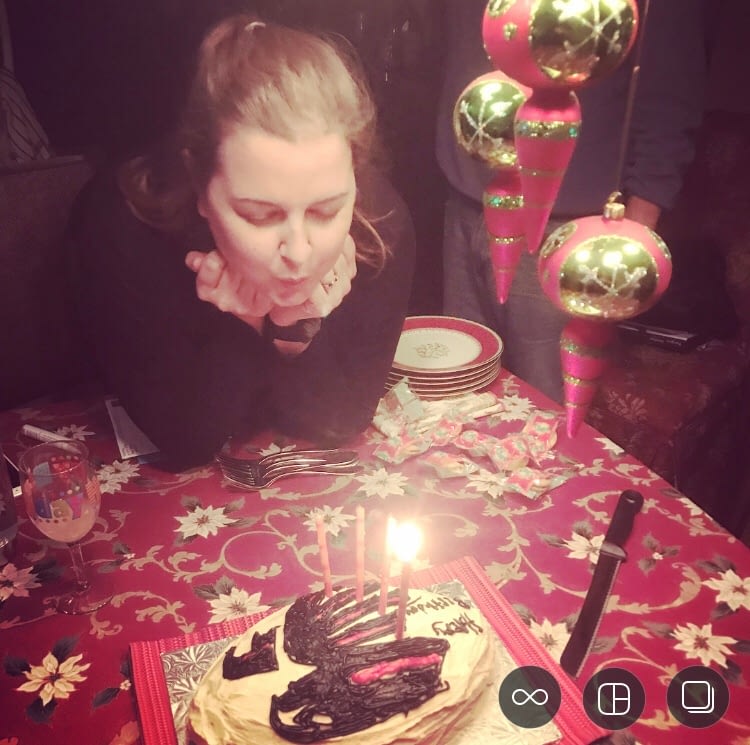 Kevin got it in his head that he was going to make me a birthday cake this year and that is the nicest thing a boyfriend has ever done for me. He let me in on the secret prototype on Saturday, the day before my birthday and I gave him some strategy tips, but otherwise it was all him and it turned out to be pretty damn good. Also, delicious.

Second: today continues in the birthday celebrations because I can never have my birthday without thinking of my cousin. It was on this day when my first love, my first partner in crime, my original Kevin joined me on earth 27 hours after my own arrival. He hit me with a super heartfelt and sweet birthday message – complete with photos – in the morning yesterday and gave me a good old cry. I’m pretty sure I still make this face. And his smile still lights up the world.

Finally, I’ve written a few year in review posts already – my year in reading, my year in running – but I always like to do a little overall year in review exercise as well. (This was 2017’s.) Since yesterday was my birthday, I attribute the start of my new year being so close to the start of the new year as the reason I love New Year’s celebrations so much. The fresh start, the new beginnings, the blank slate – I’m just a big fan all around.

I have some resolutions and new practices in my plans for 2019 and I’ll share some of those tomorrow, but today, on the last day of 2018, I’m going to take a look back at the things we did this year.

I started the year with The Bigger Yes, a course facilitated by Laura McKowen and focused on discovering, exploring and committing to your deepest callings. This gave the first months of the year a very inwardly focused dedication and feel. ❤️ I wrote my life story and that was an experience in itself. ❤️ We spent some time outdoors and moving our bodies in different ways. ❤️ I committed to writing and reading more and I followed through with that for most of the year.

We celebrated my Mom’s birthday at our place while we hosted a birthday/Super Bowl party and cheered as the Eagles hoisted the Lombardi trophy for the first time. ???? We headed down to Seattle for our first (and one of our favourites) race of the year, My Better Half at Seward Park. The weather was crisp and cool and the scenery was incredible. The post-race oatmeal bar was tops, second only to Kevin’s Significant Otter t-shirt. This was the trip on which we unwillingly bought a new set of tires – and a Costco membership! ???? Kevin and I celebrated our seven year anniversary.

I took a trip to Kingfisher Resort on Vancouver Island to celebrate my aunt’s milestone birthday with her, my Mom and one of my aunt’s childhood friends. We enjoyed supreme beauty and luxury and I even met a new cat. ???? Cara and I went to our first hockey game together. And then we went to another. ???? We started working on our community garden plot and started nurturing the seedlings that produced our summer bounty. ???? I reconnected with my high school friend, Jane.

It was Easter! ???? We headed across the border again for the Birch Bay Road Race in April. Unfortunately, we’d followed a bad lead on hotel for this trip and fled the “Birch Bay Stayaway” as someone on Trip Advisor dubbed it. Luckily, we found the Four Points Bellingham via Hotels.com and settled into a more more comfortable room quickly. Unanticipated costs of this misguided hotel booking: new swimsuits from Target. Unexpected discovery: The Pacific Caesar, from B-Town Kitchen & Raw Bar, the greatest salad either of us have ever eaten. ???? Canucks season ended. ???? I got a new boss.

We celebrated Mother’s Day. ???? We spent a lot of time in the gardens – our balcony, our community, my parents’. ???? I basically cooked my way through Deliciously Ella Everyday. ???? I talked books and podcasts and coffee. ???? I went through another melanoma diagnosis and two surgeries which I wrote about months later, in September.

The Seattle Rock ‘n’ Roll Marathon took place in the beginning of June and we headed down south for the weekend. We did the 5k on Saturday when we got to run through the Museum of Flight hangar and the half marathon Sunday. It was a beautiful course, but Kevin was injured (sadly, a recurring theme for the year) and I kept him company the whole way. No matter, we still finished and collected our medals. We also got to see Old 97s in the post-race concert. ???? Later in the month we did our last race before we took a break for summer, the Scotia Half 5k, my least favourite race ever. ???? I got my I Am A Moon Goddess mala from I Am Blessed Mala Beads.

We celebrated Canada Day and watched fireworks from our balcony. ❤️ I harvested FLOWERS from my garden for the first time! (I usually just grow vegetables.) ❤️ Cara and I made our first appearance as Canucks season ticket members at the Summer Showdown rookie game. ❤️ My month took a woo turn when I joined a Tarot challenge and explored everything I know about the cards with a daily draw. ❤️ I went along for the ride on a Lakers Island road trip to Nanaimo and I got to hang with my girl Lori and *finally* meet her daughter Emily. ❤️ We had a surprise visit from our Amy and had a delightful dinner and catch up session on Granville Island.

A relatively low-key month of getting flowers, growing veggies and closing up shop on the lacrosse season. ???? This was also when I embarked on a commitment to daily writing and the realization that not coming up with a unique title for every post set me free.

We picked apples with Barb and John. I started working from home. ???? We started talking about how this old cat can’t live forever. ???? We watched The Good Place and Making It. ???? It was my Dad’s birthday. ???? Kevin went to Philadephia for the NLL Draft. ???? I catsat.

Here’s where things got fun, most notably because travel season arrived. ???? I went to Chicago with Lesley so we could explore and she could run the Chicago Marathon. ???? I got back and three days later, we turned the car towards Whistler for a weekend in the mountains and the BCLA AGM. ???? The hockey season started up again and we went to our first game as members. ???? Late in the month we went to Bothell and our favourite hotel for the weekend and the Captain Jack’s Treasure Run in Redmond where we got to dress like pirates. ???? To finish the month, we celebrated Kevin’s birthday and then we went to the Canucks game on Halloween.

I enjoyed the Canucks Diwali event and then the next day we left for Vegas. ???? Ten whole days of it including the KronosWorks conference, the Rock ‘n; Roll Half Marathon and 5k. ???? Almost as soon as we got back, we started preparing for our final trip -and half marathon – of the year, San Antonio. ???? We started watching Christmas movies and went ice skating at Rogers Arena. ???? We fully immersed ourselves in celebrating the upcoming holidays, but with tempered it with more old cat contemplation. ???? We got the tree up and decorated and then we left town again.

San Antonio was our last stop of the year and when I asked Kevin about his favourite travel, without hesitation, he proclaimed that this was it. We were there for just three nights, we packed a lot of good times during that short span and, you know, it sure feels like we were there longer than that. ???? I lost some faith in people when I started to contemplate those who seemingly do something kind solely for the attention it’ll get them from strangers, but my spirits were lifted when we toured a couple of holiday markets. ???? We visited the Anonymous Art Show at North Van Arts where my friend Jane had three pieces on display. ???? We checked out Fridays on Front Holiday Edition to get some much needed time with friends. ???? Just after hitting the 120 day mark, I shared what I’ve learned from writing everyday and I celebrated a few of the joys that Christmas cards brought me this season. ???? I praised the Christmas bakers out there and I spent three consecutive days at Rogers Arena including the home opener for the new Vancouver Warriors lacrosse team. ???? I also made a Christmas playlist.

If I may add another side effect of writing every day, I certainly keep track of the details and the things that go on in our lives better and the memories remain more vivid. That’s always a plus.

Looking back on the year there were a number of joys, adventures, opportunities for growth, love and generousity. I had wanted 2018

On this, the final day of 2018, I invite you to look back on your year and contemplate the good, the challenging, the beautiful, the lessons and all the experiences you had, the people you knew, the things that you learned. As they say, out with the old and in with the new.