I haven’t had as much time as I’d have liked to focus on our Minimalism Challenge so far in February, but as does time, the #minsgame marches on.

When I first did the Minimalism Challenge, in 2017, I did it all on my own. There was nobody around to cheer me on or to commiserate with. When I was done, I had a lot of friends say they’d be interested in doing something similar. I’d thought about doing it later that same year, but in the end, I lost track of it until early this year. At that time, I put it out on Twitter, Facebook, only blog here and a few friends expressed interest again. Together, we agreed on February, created a Facebook group for accountability and encouragement and awaited the 1st of the month so that we could get started.

So far, we’ve collected 1-2-3-4-5 things per day and either given them away, sold them or simply trashed them. Speaking from experience, this is the easy part and it gets much more challenging and fast, but it’s a good way to ease into it.

If I remember correctly, you kind of get into a groove with decluttering as the month goes on, but at the beginning, it can be hard to know or decide where to start. Since I quite decidedly dislike cleaning, there was no part of our house that really thrilled me to address. To solve the problem of where to work, I downloaded an app to help me. It’s called Tiny Decisions and you fill the wheel with possible answers to the question you want to ask and then you spin it. I asked, “Where do I want to declutter?” Every day I get a different answer. 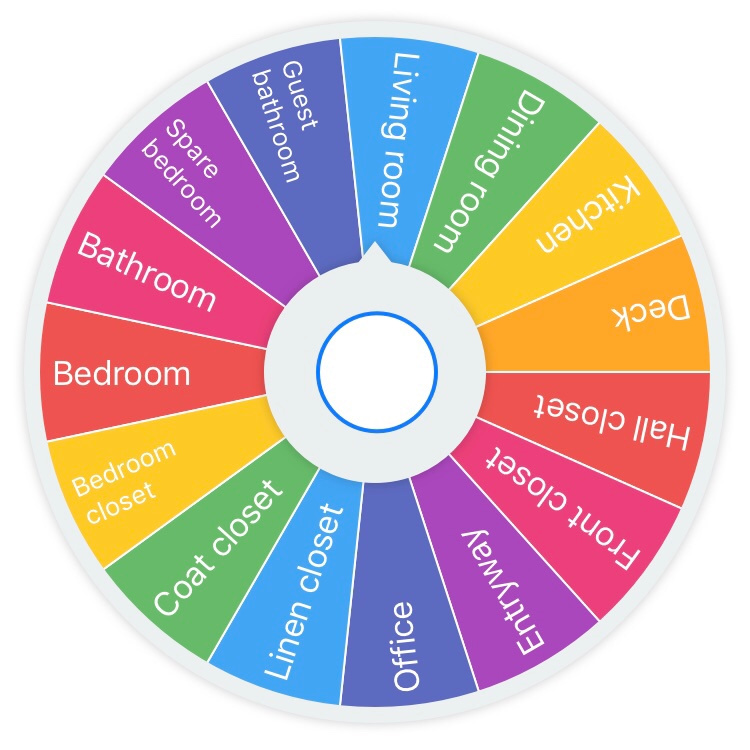 Here are the collections of things I’ve unloaded so far.

Day 1: My Fitbit Aria scale. It was awful from the day we got it. It wasn’t reliable. It wasn’t accurate. And you know the other thing it wasn’t? Cheap. This was the final nail in the coffin and I knew after I got it that I’d never buy another Fitbit product again.

Day 2: I get carried away and I buy team shirts, especially when I go to games in other cities. These two haven’t even had the tags removed! Fortunately, I have friends who are fans of these teams and they’ll be the recipients of these shirts. (For the record, they are Saad and Hutton.)

Day 3: These are the seat cushions that we got from the Winter Classic at The Big House outside Detroit on New Year’s Day 2014. I had great visions of us putting them to use at other events, but, alas, we have never used them since that day and I’m not anticipating an opportunity. With them, a pair of flip flops that I have had for a century and rarely even think about wearing.

Day 4: Three pairs of jeans – one I never even wore aside from trying them on. And a reusable shopping bag. All of it is heading to work with Kevin. His clients are always in need of clothing and any sort of bag is a big hit down there.

Day 5: A pair of heels I always hated, a pair of flip flops I never wore, recovery flip flops that hurt my feet and two frisbees.

I didn’t really feel like my first experience of the Minimalism Challenge taught me a lot. I learned a few things about myself like what I tend to have too much of and what excess looks like to me and how I can better manage it, but I didn’t get any real life lessons out of it. This time around, though, I’ve started to notice it seeping into other areas of my life. How I’m managing food that we have in the fridge and in the pantry or products in the bathroom or throughout the household. I’m prioritizing what needs to be used first, what can be disposed of and thinking of need in a whole different light.

It isn’t too late to join us! If you’re interested, just let me know!