The last time I gave a TV recommendation, it was for The Good Place and I stand by it. Having just aired the season finale of season three, the show has maintained if not exceeded its brilliance the whole way through.

(In truth, the last show I actually recommended was Making It, but that’s more reality, I’m talking fiction here.)

Yesterday, on our first vacation day, one we’d proclaimed would be decidedly lazy and low-key, we decided we’d start a new show. The only problem was…which one? There were a few prospects, but in the end, we narrowed it down to two: A Million Little Things and Friends From College.

If I’m honest, A Million Little Things was my front runner because it’s ongoing. We could catch up and then wait on new episodes to be aired on TV. We watch something that’s on right before it – is it Grey’s Anatomy? Maybe.

Anyway, Kevin was more partial to Friends From College and then I remembered that it had come recommended by my friend John. On Twitter. Well, sort of. 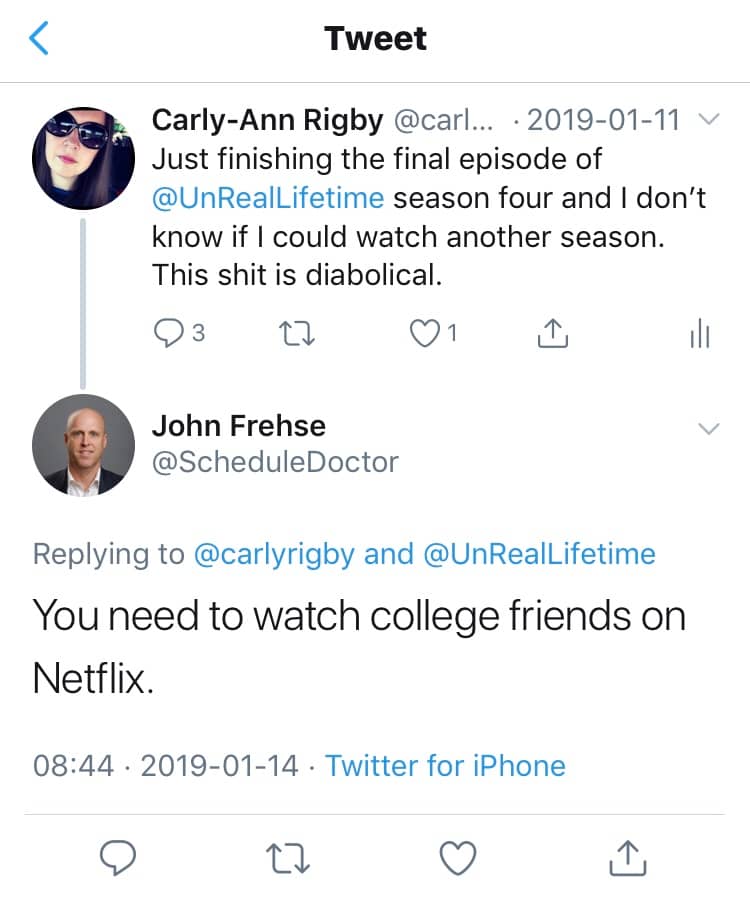 So, we settled in and DEVOURED the first season. We were going to continue into season two, but decided to hold up and save it for today instead. And instead we went to bed and talked about what we’d watched and who our favourite characters were. (Mine are Max and Sam, Kevin likes Marianne and Ethan.)

Twenty years after graduation, a tight-knit group of college friends reconnects and discovers that love hasn’t gotten easier with age.

It’s the exact kind of deep and darkly comedic show that is right up my alley. One thing I love is that the soundtrack is perfectly aligned with the time when they would have been in college. I would have been the same age at around the same time and the music they use is dead on.

I want to address John’s comparison between the diabolical behaviour by the Unreal crew and the diabolical behaviour by the College crew. Both are nightmarish human beings, but their actions are decidedly different. On Unreal (which I also wholeheartedly recommend) they are monsters without regard for the feelings or wellbeing of others. On Friends From College, they’re just kind of ignorant and bumbling idiots. None are good, but all are entertaining.