Top Posts
23 for 2023: things we’ll do this year
What should I focus on on in 2023?...
Milk Fed
My Happiness Project: February
Be your own historian
Post-vacation blues
Bad habits
Home alone
What’s going on in your community?
Quick turnaround
Home Books My most meaningful authours
BooksTDTFYH

My most meaningful authours

The text I received came along with a photo. 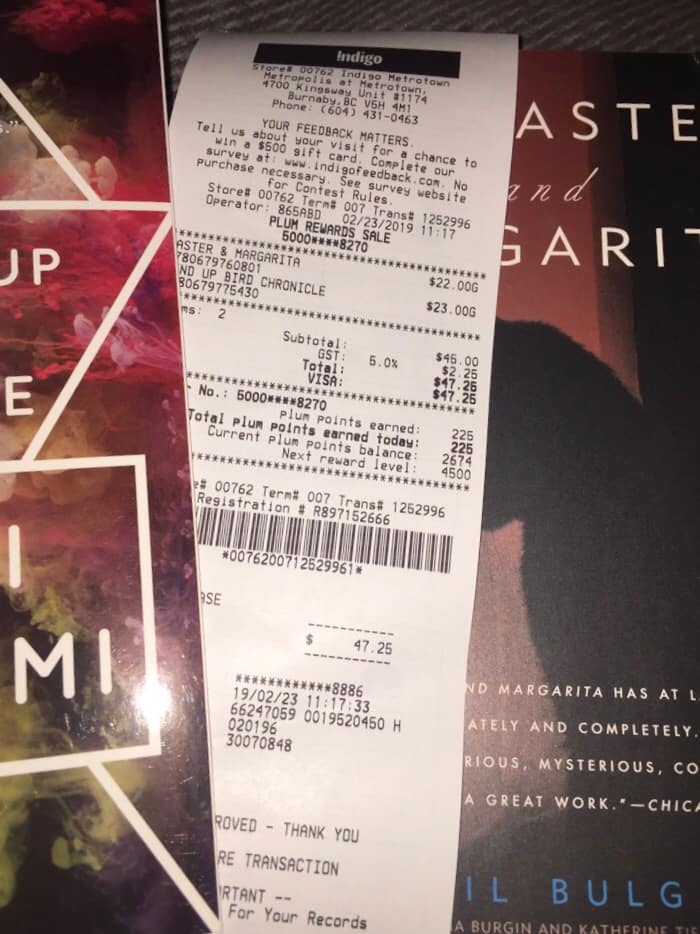 Here’s another argument to support your library. I just paid $47 for two paperbacks.

I’ve grown largely out of touch with the cost of books because I’ve given up my attachment to owning them thanks to becoming reacquainted with my library. Over the past several months, we’ve been enjoying really long borrowing periods (it’s been six weeks for quite some time and right now it’s stretched out to ten!) and with the reopening just around the corner on April 1st, I can only assume that borrowing periods will go back to 21 days. Will it be as easy to take and return my books during that adjusted loan period? Perhaps, but I don’t see myself going back to buying books anytime soon.

Something else that interested me about that text was that one of the two books was The Wind-Up Bird Chronicle by Haruki Murakami.

I was introduced to Murakami by a friend sometime around 1999. At the time, I read his full catalogue, settling on Hard-Boiled Wonderland and the End of the World as my favourite. It was fantastical and it was enthralling to me. It’s two stories told in parallel, but alternating chapters. Hard-Boiled Wonderland is told in the odd chapters and The End of the World is told in the even ones. It’s delicately woven and it’s genius. That Murakami journey accounts for one of my favourite reading phases of my life.

Contemplating that today, I remembered that earlier this week, I felt moved to start reading some of the first books to have an impact on my adult life. It was after I saw this tweet from Goodreads.

I saw a few mentions of books that are up there for me – The Alchemist, Le Petit Prince, to name two – but the book that sprung to mind when I really thought about it? It was Shampoo Planet by Douglas Coupland.

I couldn’t find a decent photo of the original cover online so I had to dig out my own banged up and dog eared copy.

Although I never read his first book, Generation X, until much later, Shampoo Planet meant a lot to me. For the first time, I think I felt like I could really identify with literary characters who weren’t being glorified. They were imperfect and quirky and they didn’t quite fit in and I loved that.

Later, Coupland’s Girlfriend In A Coma would become the first book I ever sat down and read in one sitting. There aren’t many books that have inspired me to do that, but that was my first experience of it.

There have been many great writers whose works I’ve adored and these two may not be the best who’ve ever written, but Murakami and Coupland are two who have provided me with some of the greatest memories.

Which authours have been some of the most influential in your life?