Top Posts
23 for 2023: things we’ll do this year
What should I focus on on in 2023?...
Milk Fed
My Happiness Project: February
Be your own historian
Post-vacation blues
Bad habits
Home alone
What’s going on in your community?
Quick turnaround
Home TDTFYH Come From Away
TDTFYH

Today, I had the pleasure of attending a performance of the musical Come From Away. The production wasp my in town for six days and today was the last one.

If you (like me until just a couple of weeks ago) don’t know what it’s about, see the Wikipedia synopsis below. 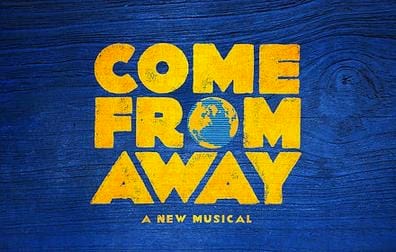 Come from Away is a musical with book, music and lyrics by Irene Sankoff and David Hein. It is set in the week following the September 11 attacks and tells the true story of what transpired when 38 planes were ordered to land unexpectedly in the small town of Gander, Newfoundland and Labrador, Canada as part of Operation Yellow Ribbon. The characters in the musical are based on (and in most cases share the names of) real Gander residents as well as some of the 7,000 stranded travelers they housed and fed.

I first heard about it back when Julie was in town and we cruised by the Queen Elizabeth Theatre. There was a big billboard out front and she remarked that we *had to* go see it. I looked into it and the show was already sold out. The only tickets were resales that started at about $475. We didn’t need to see it that bad.

Fast forward a couple of days and I got a call from my friend and coworker, Siobhan. She just happened to mention that she might have a line on a ticket to the same exact show, but at a full ticket price that was a fraction of the resells I’d seen online and including transportation and lunch. She was already going with her mom and some friends, but told me I was welcome to join. I told her that if it materialized, I was in.

The show itself was excellent. Each cast member played several characters transitioning back and forth between them by adding a jacket or a headpiece and then removing it. It was a marvel to watch how, beyond being extremely talented with acting, singing, choreography, they could also just flip from one character to another over and over and over again, not to mention all the accents they juggled as well.

The shared recollection of 9/11 is heart wrenching, of course, but also informative. There were a number of historical facts revealed throughout the performance – things did never known or realized.

The heart of the story is in the way the Newfoundlanders open their arms and their homes to 7000 unexpected guests – essentially doubling their population overnight.

As expected, there are threads of really emotional storylines and the experience isn’t ideal, but there are bright spots and humour and some great musical numbers.

One additional part I really appreciated was the profile of Beverley Bass, one of the pilots who was rerouted to Gander en route between Paris and Dallas. Bass was the first female to be named a captain for American Airlines and the musical took time to celebrate that and her other achievements.

All in all, it was excellent. The only thing I regret is that Kevin wasn’t able to see it, too. If you get the opportunity to see it, I’d suggest you take it.

Funny story, and it’ll tell you something about me. I actually kept it together throughout the majority of the production – I got misty-eyed in a few different parts, but never really cried…until, that is, the ovations. That is what chokes me up every time.