Top Posts
23 for 2023: things we’ll do this year
What should I focus on on in 2023?...
Milk Fed
My Happiness Project: February
Be your own historian
Post-vacation blues
Bad habits
Home alone
What’s going on in your community?
Quick turnaround
Home TDTFYH The woman who…
TDTFYH

I came to a conclusion earlier this week. It was while I was sitting, waiting for my appointment with my new ND. I looked around the waiting room and every. single. person. there was staring at their phone.

As you know, my social media appeal is on a serious decline and with the exception of Twitter, I am basically totally over it. Some of it is that icky privacy piece, but a lot of it is our collective dependence on our phones. This resolution is in revolt to that. 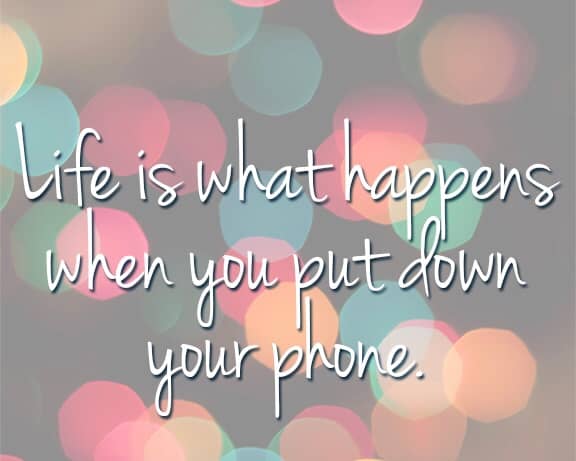 Now, I’m not opposed to being dependent on our phones. These things are genius! They put information at our fingertips! They make communication easier than ever before! And they’re fun! They assist with organizing home life, work life, health and wellness, nutrition, even meditation – they can help with it all.

My problem is, instead, that we’re so hooked on them that even when we’re not tending to any of those great things, even when we actually have nothing to really do on them, we have them glued to our hands anyway.

I’m a firm believer in a you do you philosophy and I’m perfectly comfortable with other people prioritizing their phones over time spent with friends or quiet time away from them. Do I think it’s the healthy choice? Hell, no. But we’re all able to make our own decisions and my decision is that I don’t want to be like that.

I used to get a really bad rap for being on my phone all the time. Perhaps when cellular phones were in their early days I may have been guilty, but largely, I think I actually fall on the lower usage side of the curve. My mom still gives me shit anytime I pull my phone out even though Kevin and my brother use theirs WAY more than I do while we’re over at their place.

I thought about friends and people I respect who, even though they obviously have phones, don’t have it in their hand or on the table at all times, don’t have their ringers on out in public, don’t jump at every little notification that pings their way. And I want to be more like that. I’ve become pretty aware of the phone’s whereabouts and in one on one situations, I try to keep it out of the way and not let it interfere with my attention. I honestly don’t even know what my ringtone or text notification is because I cringe anytime I hear a phone make a sound and I will never let that be me.

So, I want to be the woman who…

I want to be the woman whose phone is virtually invisible, never seen, but thoughtfully used.