Top Posts
23 for 2023: things we’ll do this year
What should I focus on on in 2023?...
Milk Fed
My Happiness Project: February
Be your own historian
Post-vacation blues
Bad habits
Home alone
What’s going on in your community?
Quick turnaround
Home TDTFYH #CBJ
TDTFYH

It’s Sunday night and I’m tired. We spent the day mostly at home. Kevin (bless his heart) made a trip to Whole Foods for groceries while I devoured what remained of the book I started yesterday (Blackout by Sarah Hepola.) I did the weekly cleaning and he made lunch/dinner.

Tonight. We headed to Rogers Arena for the third night in a row and the second hockey game in as many nights. Unlike other nights, I actually did have a side tonight since the Columbus Blue Jackets were in town and they are the closest thing I’ve made to a single team in years. 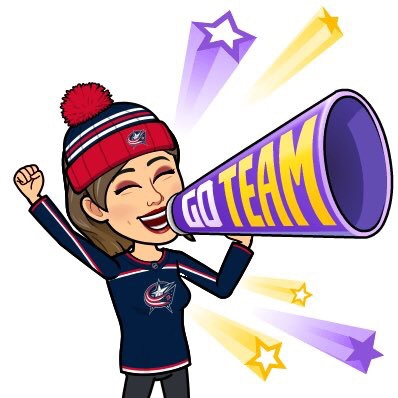 Ever since I was a kid, I’ve asked my dad who his favourite team was. Whether hockey, football, lacrosse or any other league, his answer has always been that he doesn’t have one. (Though, he finally gave into the pressure and picked an NFL team. The Panthers.) As someone who always had a team, I didn’t get it.

When I met Kevin, I’d been on a hockey hiatus for years. I seriously didn’t dig the shootout and I was severely opposed to the point for an overtime loss. So I bailed. With Kevin’s arrival in my life, he brought with him a keen interest in hockey and his avid attention to the sport became contagious. I tried to resist, but eventually found myself giving in more and more. I picked San Jose as my first team after coming back, but after they traded my favourite player, my heart just wasn’t in it anymore. I’d go to games without a real side. Sometimes I wouldn’t realize I had a side until I got there and I’d discover who I was cheering for mid-game. Sometimes I’d be as surprised as the next person. Sometimes I wanted everyone to win and sometimes I wanted nobody to win.

There is a lot of pressure to pick a team. Just like I’d needle my dad, people would ask me all the time. “Well, if it isn’t the Canucks, then who is it?” I didn’t have an answer.

Pretty soon, I started breaking down the league into groups of LIKE/DISLIKE/INDIFFERENT. I’d generally keep about five teams on my LIKE list while dispersing the remaining 26 among the other groups. Some of the placements have been consistent, some are rather fluid.

Earlier this year, I finally felt like I was ready to commit more to a single team and that team was Columbus. Tonight they made me pretty proud.