Top Posts
23 for 2023: things we’ll do this year
What should I focus on on in 2023?...
Milk Fed
My Happiness Project: February
Be your own historian
Post-vacation blues
Bad habits
Home alone
What’s going on in your community?
Quick turnaround
Home TDTFYH This is going to be a post about hockey
TDTFYH

Because I am just so freaking excited about the start of the playoffs tonight.

I’m most excited about one series – the one between the Tampa Bay Lightning and my Columbus Blue Jackets, of course. Just because I don’t have CBJ advancing past the first round doesn’t mean they are my heart’s pick. I’d give it all up for them to win this series.

Alas, I have some attachment to reality and I know it isn’t likely. One can dream…

I love this video that Jillian Fisher did about her bracket of chaos which just so happens to be pretty similar to my regular I-did-the-best-I-could bracket.

Here’s what I love: 1. She’s willing to take a risk and factor both rational and, ahem, irrational beliefs into her selections. 2. I totally identify with her statements of, “I don’t know how we got here, but here we are.” I feel you, girl. 3. She realizes that it’s just a lot of fun.

Whenever I start a bracket, I just make pick after pick and see where it gets me. Here’s where I ended up this year. 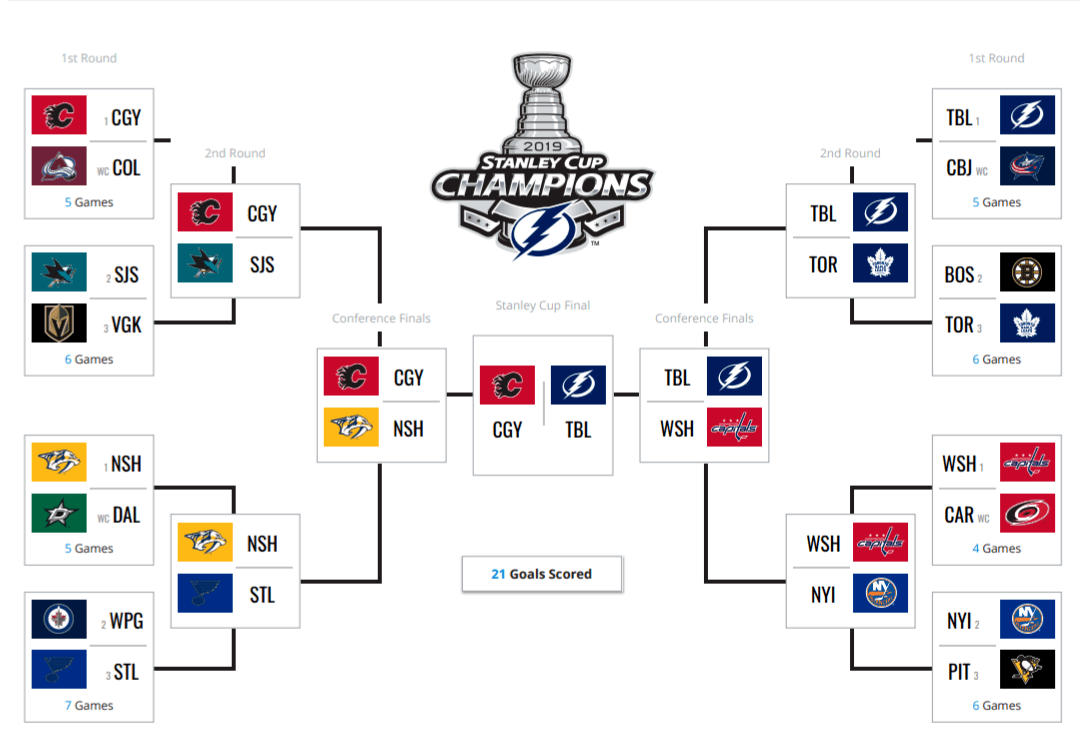 Like I said, I had to sacrifice some wants for the sake of the longevity of my bracket. (My tragic March Madness performance has hammered my confidence.)

I was in my seat (on my couch) in time for pick drop of the Blue Jackets-Lightning game tonight and I was *thrilled* with the result. If I’m honest, I didn’t expect a full comeback. The BJs came out full of jitters and the Bolts were just flying. After the first intermission, Columbus came out stronger, calmer and more confident and it started to come together. I was happy with that, thinking they’ll have a new start in game two. Nope, I just need them to keep doing exactly what they’re doing!

There was a point in the first intermission when the broadcast switched to the Islanders-Penguins game. It was 1-0 Isles when it came on, then one minute later it was tied. If it means eliminating the Pens, I will boycott watching even one more minute of this series. I can catch up with the Islanders in round two.

Next up, we bounced back and forth we between Blues-Jets and Predators-Stars.

I’m mostly indifferent to the St Louis series, though I did pick them to advance. And I’m a big fan of that rookie goalie. And Tyler Bozak (he was my favourite Leaf) who had the game winner tonight.

I was once a big Nashville supporter and I could be persuaded to be one again if they hang in there for a while. I like The Pride of PoMo (feel free to use that, I’m still waiting for that to catch on) because he’s great and we have the same hometown. I don’t like their shitty and unsportsmanlike chants. I know, I know. I just don’t. I was once a dedicated Stars fan, but there isn’t much nostalgia there so it makes these teams basically even in my mind/heart.

Finally, we headed over for the start of the San Jose-Vegas game. Again, I’m pretty indifferent about who wins this series because I mostly like both teams.

Which game(s) did you watch tonight? What were your first impressions?