I hit a milestone this month: halfway to my reading goal for the year. I’m ahead of schedule and I love it! 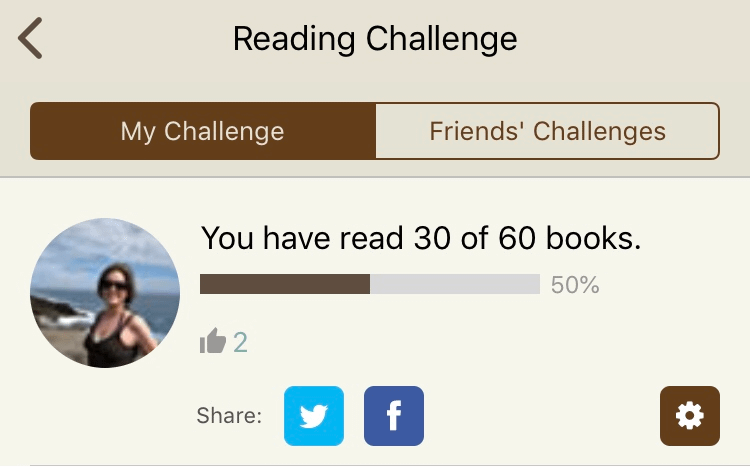 Here’s what I read during the month of April.

The Book of Essie by Meghan MacLean Weir

Essie is a teenager who grew up in a reality tv home. Her every move has been watched by millions and she’s finally ready to work that to her advantage. I read the first two chapters of this book while sitting in the Vancouver Public Library the first time we visited. It took a little while before I got my hands on the copy from New West library, but once I did, I went all in.

I have one tiny complaint and it is the strangest complaint I’ve made about a book yet. The story was good and so was the writing. The typeface, however, was awful. It’s the only thing that contributed to me taking so long to read this book.

I’ll start by saying that I’m not a big fan of period pieces. Every so often, one comes along and I don’t mind it. In the case of Dear Mrs. Bird, it was fine. The problem was that I’d hoped the characters would be a little more spunky. They tried, but they don’t go all the way. It was a cute story with some thoughtful and some sad scenes. The only thing that stood in the way of me loving it was that it never really seemed complete.

The Gum Thief by Douglas Coupland

There were a lot of negative reviews on Goodreads, but I easily wrote them off to people not getting Coupland’s quirk. I’d been craving another of his books – he is, after all, one of my favourites of all time.

One of my oldest friends suffers from Cystic Fibrosis. It wasn’t until we were adults that I clued into the fact that she had to keep her distance from other CFers. Hence the title of this book. (Though the recommended distance between two people who have CF is actually six feet.) This young adult romance between two teenage CF patients who meet in hospital and fall in love is sweet and it’s tragic and it’s a melancholic delight, which happens to be my favourite genre.

I don’t know where to start on this one so here’s the description from the publisher’s page.

In Love Wins, bestselling author, international teacher, and speaker Rob Bell (Velvet Elvis, Drops Like Stars) addresses one of the most controversial issues of faith—hell and the afterlife—arguing, would a loving God send people to eternal torment forever?

As someone raised largely without religion, I’ve developed an increasing curiousity as the years have passed. I appreciate Rob Bell‘s approach in rectifying traditional interpretations and adding more understanding, compassion and love. I enjoyed this read as something of an intro to a new way to look at western religion.

Enneagram types are a hot topic in my world right now. I liked that this book approached the assessment through a series of paragraphs instead of giving a quiz like many websites offer. It taught a lot about types and how to ensure that the reader is doing a through evaluation. It approaches the types with the intention of providing deeper understanding and I was especially intrigued by the guidance towards correcting each type’s path from where they’d been led astray.

My handful of friends who’d read this book all said the same thing in their Goodreads reviews: that it was typical Stephanie Plum and that they didn’t know how much more they can take of her. Interestingly, before I’d read that, it was exactly my take, too. In fact, I was a little turned off for the first several chapters. I’m not sure what, but something actually turned it around for me and by the end, I quite enjoyed it for what it was: light, ridiculous, fun.

The Sun Is Also a Star by Nicola Yoon

Speaking of love stories that can’t necessarily work out, this is the ultimate in that. He is in the process of applying to Yale, she is about to be deported. He challenges her to fall in love with him before the end of the day and she resists until she can’t. It’s a bold story to try and tell in such a short period of time and under such extreme circumstances, but it works. I think it qualifies as a young adult novel, but it also worked for me.

What did you read this month? Any highlights? Lowlights?

I’ve got to be behind schedule. I’ve been focusing on being more active lately, which is basically the opposite of reading. However, that may be about to change…

My library hold list just caught up to me. I request stuff and put the active date way out to the future so I can move up in line but not check them out until I am ready. It’s been a good system but apparently 4/30/19 was not as “future” as I previously thought. I now have 7 items being processed that I can’t deactivate. 3 weeks to read most of them (no renewals if there is a wait list). Should be fun.

Also, I’m sure I read The Gum Thief a very long time ago. I remember no specifics other than liking it. Funny how I can recall that but literally zero details.

You play the same game as I do with the library hold system! I’ve resolved to only have five things actively holding at a time. We’ll see how that goes. Tell me what you’re getting!!