For years I didn’t have a garden. I lived in a fantastic apartment that had only one flaw: no balcony. I had nowhere to grow anything other than a few houseplants. I was good at that, but I really craved more.

When Kevin and I first moved in together, we lived in a two floor townhouse that had a little wooden deck in the back that got afternoon and evening sun. We moved there in June and settling in distracted us from the possibility of a real growing season that first year. Towards the end of July, we picked up four straggly plants from the nearly empty garden centre nearby: two tomatoes and two strawberries. It was mostly a charity purchase. Their prices were way marked down and we bought them because we felt sorry for them. We took them home, repotted them into fresh soil and put them out on our tiny deck. We were so surprised when they shot up almost immediately and actually produced some fruit (though not much) by the time the season was over.

The next year, I bought more of the same plants, only much earlier in the year and much healthier overall. Again, success. They loved that deck!

That fall, we relocated back to New West and an apartment with a similar facing balcony. More afternoon sun, more happy gardening potential.

After two seasons of proving (mostly to myself) that I could do it, I decided to expand my goals and my season. That was the first year I invested (my money and my heart) in growing seeds. I took so much care in sowing them, watering them, monitoring them. I was thrilled when they sprouted and continued to grow. The first night I relocated them outside, I felt like a parent sending their child off to college. I think it even kept me up that night. By the time prime time summer came around our deck was a virtual jungle of tomato plants. They were everywhere! 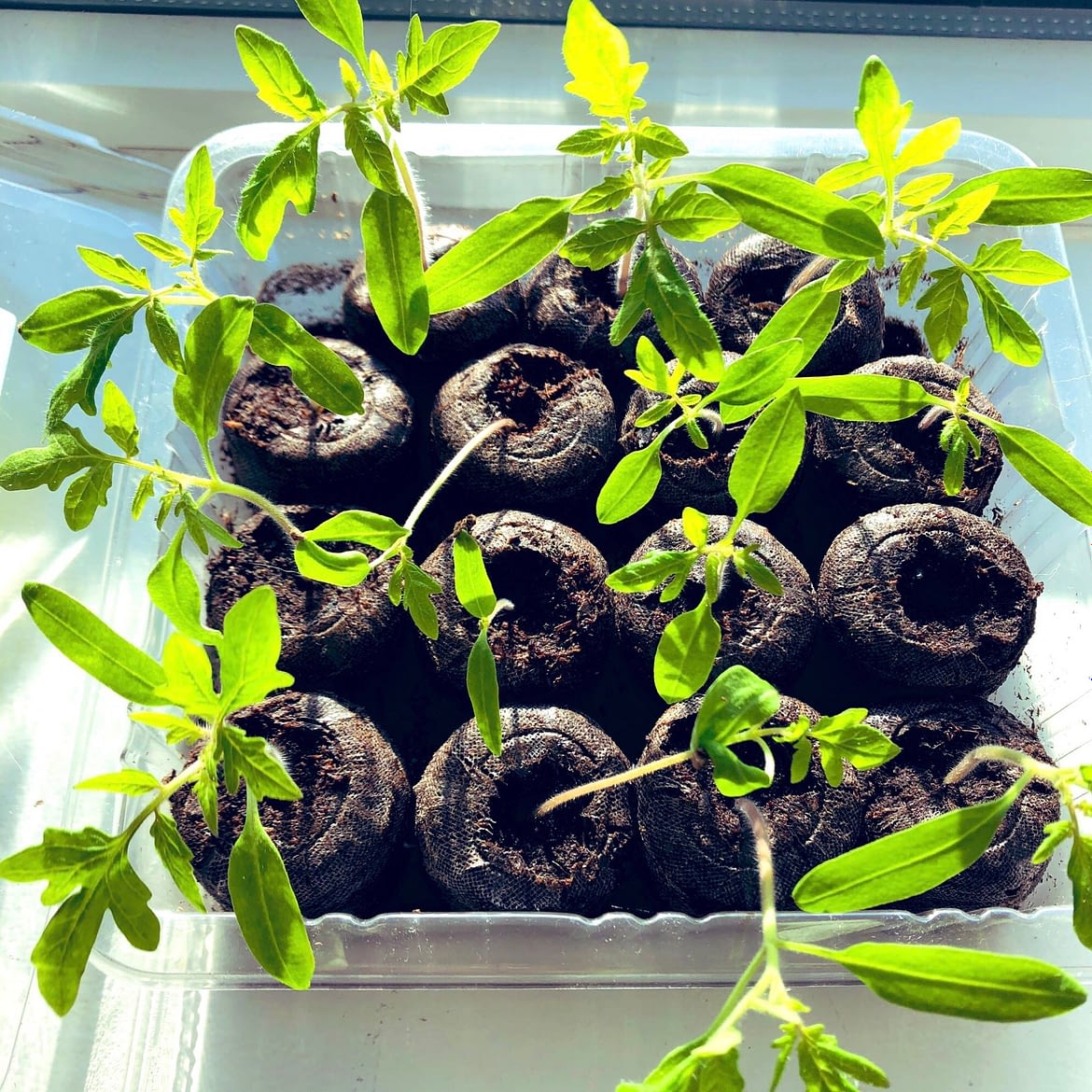 The next year, I planted more seeds and supplemented them with nursery grown plants as well. As each new gardening season has approached, I’ve become more determined to grow more seeds and fewer ones that somebody else grew. I like the challenge of growing things from seed and it adds an extra layer of satisfaction when I’m successful. This year, I’m going 100% seed grown plants for the second year in a row.

There is one problem with this plan. It’s that I invariably grow too many little seedlings and have to find good homes for what I can’t grow on our balcony. I’ve cut back this year and am only growing on the deck – no extra spaces in community gardens or other people’s yards. I want to enjoy what I’ve grown and be able to see it every day, sit amongst it, watch its progress.

We spent part of last weekend delivering some of my extra plants to friends and family who welcomed them into their gardens. I’ve taken some to work and convinced people with access to soil, but no use for it to try growing this summer. I really don’t want any to go to waste, but every spring I can’t help but want to spread the gardening love and tomatoes seem like the best breakthrough plant to grow.

I’ve found homes for most of my tomato plants, thankfully. Enough to know that they’ll all end up somewhere even if I have to keep a few more than I’d planned. It’s good news for sure, because the peppers will be ready soon, too and then we’ll need to start all over again!

This is the first post I wrote about the easiest ways I’ve found to grow tomatoes.

I like gardening too. I have two big gardens so far. There, I plant many kinds of vegetables and small flower plants. It’s very good article when I get this as a gardening writing form. After this article, I can know and learn a lot about Gardening. Thank you for sharing such an effective post.