It takes a while to come down after a game. I’m always wired when we get back from the arena – even more so after a win – and it usually takes me a good few hours to shake that off. Even when my body is ready for bed, but mind is still racing. It was after 1am when I finally turned the light off. I’m pretty sure I fell asleep right away.

By 7am we were up again getting dressed and ready for today’s NHL draft downtown at Rogers Arena. We got our morning chores done and slowly made our way out of the house. We grabbed coffee and hopped in the Skytrain. When we arrived the doors were already open and festivities were underway in the plaza. 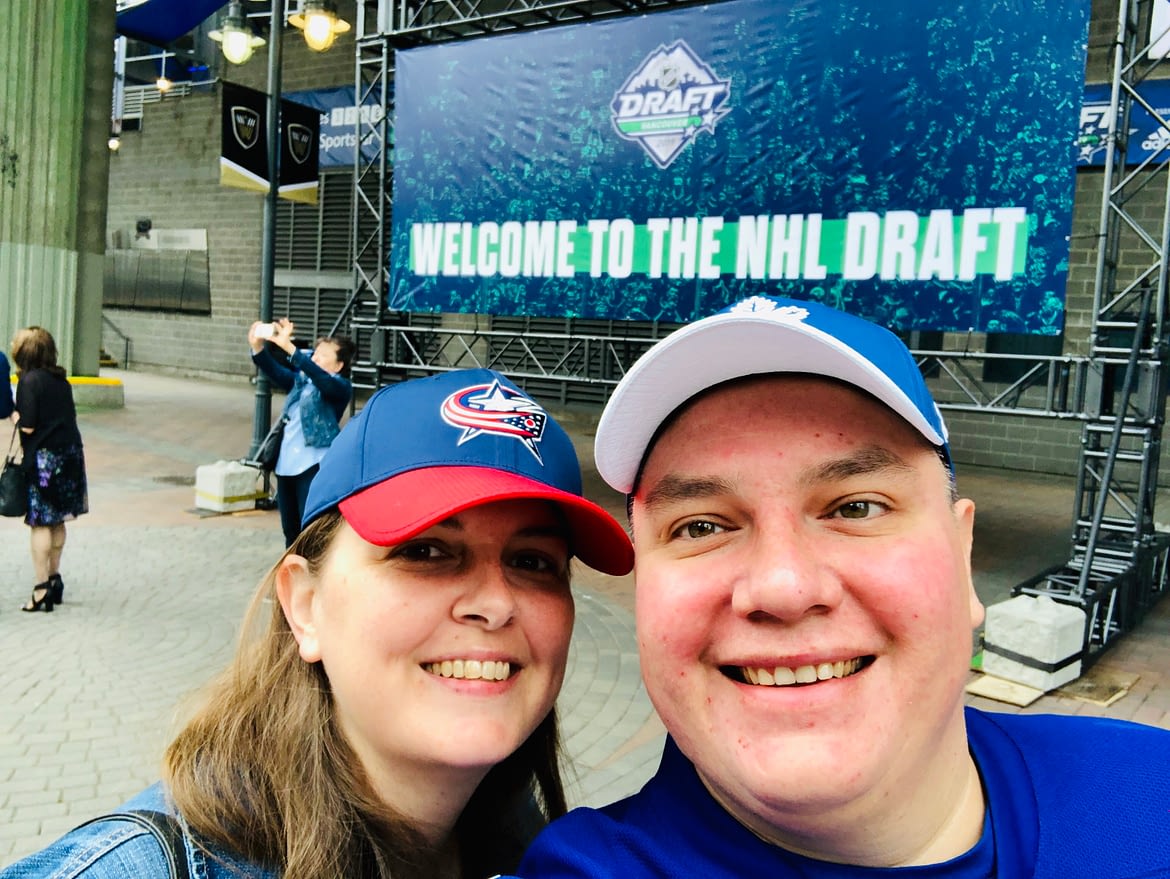 We meandered through the tents and displays then around both concourses before getting to our seats just before the 10am start.

All the trophies were in the house and on display. This is about only half of them in the picture below. Who knew? Apparently the Stanley Cup was downstairs on the lower level, but we never investigated to confirm that.

The draft floor was exactly what we were expecting, exactly what we’d seen on tv, but the energy was palpable. Tension and excitement were in the air.

We sat down about twenty minutes before the festivities got underway. They gave a ten minute notice for all NHL delegates to be on the floor and then there was a ten minute gap between that time and when the draft began.

This was just around the time that the two big trades were breaking. We knew both PK Subban and Patrick Marleau we’re on the move, but as we sat in our seats, we scoured our phones for bits of news and tweets about where they were going and for what.

We cried when we read Patrick Marleau’s note to Auston Mathews and Mitch Marner.

I love how he says, “Never forget get how good you guys are.” I’m hopeful that he means both in hockey and in life.

As teams assembled, we started to recognize people we knew, though, of course, general fans don’t always know the behind-the-scenes folks as well as they know the players and coaching staff.

A few of our sightings today:

We could also see how different organizations interacted both internally and with others. Some tables were abuzz with talk and action, others were shrouded in formality. It’s a cultural thing, I’m sure.

It was fun to be in the crowd surrounded by people sporting their team’s colours and for once it wasn’t met with aggression. It reminded me of the fun of fringe World Junior countries play. Everybody was having a good time, supporting their favourite club(s) and cheering for some young kids who were living their lifelong dreams.

Of our two teams, the Leafs picked first and most often. Columbus only had two picks going into day two of the draft and as the clock turned over to them for their first pick, #81, they traded it for two picks later in the fourth round.

Despite the lack of action, we still enjoyed being there. It may sound surprising, but the three minutes allotted to each team don’t feel like that long when you’re watching the last guy whose name was called interacting with his family and loved ones, then making his way down to meet this professional destiny. We’d cheer and look around the arena whenever a pick was made and when we weren’t watching the celebrations, we’d keep an eye on the floor and who was talking to who, who seemed deep into an intense phone call, etc. The tv broadcasts don’t do justice to just how much is actually going on in front of you.

Our picks came and went and we cheered for hundreds of players whose names we hadn’t know before today. We listened to dozens (that may be an exaggeration) of trades that did nothing more than shuffle high round picks around, sometimes between this year and next.

All and all, it was a fun event and I’m really glad we went. I’d definitely go again if the opportunity ever arose. Montreal next June, anyone?