Okay, here we go. Another season of Big Brother. Telus already outed me as a watcher (as you know) and I’m geared up to start afresh.

I’m not a long-time watcher and I’m certainly not a super fan. I’ve watched three seasons is regular BB and one season of celebrity BB (which I actually preferred.) I tend to like it at the beginning and like it at the end, but there is a middle part that’s just agony. It’s the time when people get supremely shitty with one another. I swear I won’t watch it anymore, I rant about the bullying and targeted mistreatment and then eventually, after a few skipped episodes, eliminations and updates from Kevin who continues to watch it without me, I’ll start watching again.

The show is a fascinating look at human nature and how people interact with/respond to one another. It undoubtedly involves a lot of deceit and manipulation and every group astounds me with their ability to think in such merciless ways. 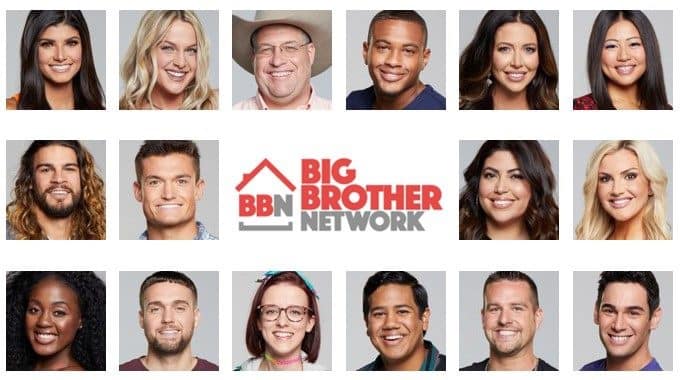 I’m following my girl Yvonne‘s lead from a few seasons ago – I’m pretty sure it was season 19 – when she made a prediction on day one about who would go out and when.

We are just finishing up tonight’s episode and here’s the order that I came up with while watching it. These are predictions based entirely on first impressions and not at all who I like and who I don’t. (I don’t even know yet!) There is no science or even strategy to this. I may as well have just picked these names out of a hat.

What are your predictions?

I hate this show! I do watch it because Joel likes it but it makes me so mad. And my anger even infiltrated Amazing Race this year because of the BB cast members.
An unrelated problem I have with any of these reality-competition shows is that I cannot get invested for most of the season. I don’t know who anyone is so I don’t care. Talk to me when we’re down to like 5. 😉 Bachelor/ette, Survivor, AR, BB… it’s always the same. [My running joke with Bach is “who even IS this guy?!”.]