Make something happen this summer

I’m a fan of making lists of intentions. It might be easier for me because I don’t generally beat myself up when I don’t meet the goals, but I do, in most cases, try to make them happen. I know some people get really hung up on falling short of their plans, but I’m not one of them. People are different and that’s a great thing.

I remember the episode of Happier when Gretchen and Elizabeth reviewed their 18 for 2018 lists. Anyone who has heard even just one episode would have no issue believing that when Gretchen reviewers her list, she crossed off every single thing. If she hadn’t, she’d have been bothered by it.

On the flip side, when Elizabeth went through her two lists, she had to say no a lot. Without exaggeration, I think she ended up completing less than 10% of her endeavours. A few times she noted that missing a particular goal was particularly disappointing, but overall, she just owned it. She even laughed about some of them.

I got to thinking of all of this as I caught up on some of my email tonight. (Is anyone else as bad as I am at keeping up with their email? Maybe Liz, not Gretchen.) 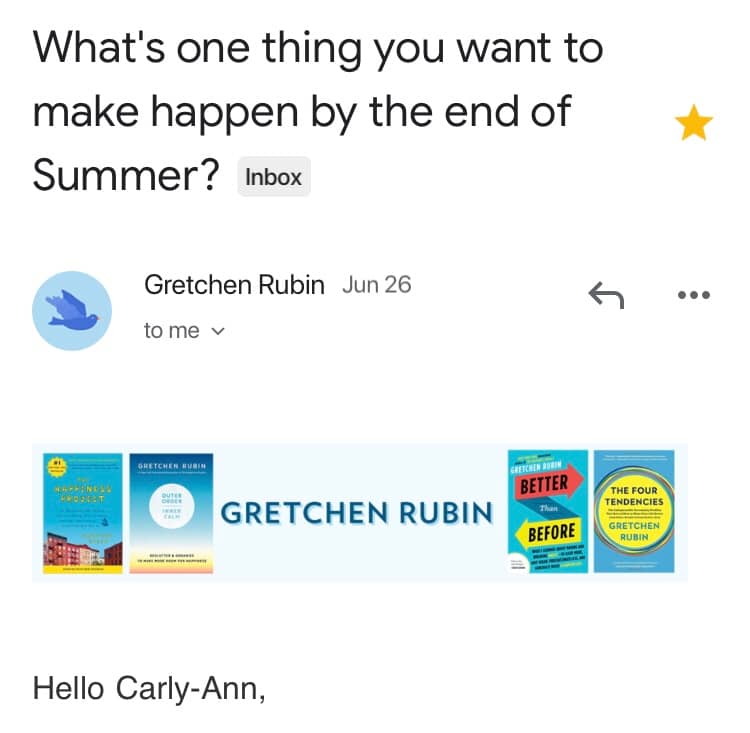 I found this email from Gretchen Rubin. As detailed in the subject line, she talks about adopting a goal for the summer. No surprise: I LOVE this.

Doesn’t it seem festive and fun to have a goal just for one specific season!? It’s similar to the spirit behind my things we’ll do this month lists, but a little bigger (season) and smaller (just one thing) at the same time.

I have to admit that I didn’t think of my goal right off the bat. In fact, I haven’t settled on one just yet. I have a few ideas and I’ll update you as soon as I can feel confident I’ve settled on the right one.

I’m also going to spend some time revisiting my one little word for the year. Gretchen suggested it in her newsletter, but I’d also just been reminded of it when I got reconnected with my Instagram account.

So, what do you want to make happen by the end of summer?