Top Posts
23 for 2023: things we’ll do this year
What should I focus on on in 2023?...
Milk Fed
My Happiness Project: February
Be your own historian
Post-vacation blues
Bad habits
Home alone
What’s going on in your community?
Quick turnaround
Home TDTFYH Down day
TDTFYH

That was today. Not down emotionally (although it was a little of that, too) I mean that it was a down day as far as activity went.

We didn’t do much of anything.

Originally Kevin was supposed to work at Backstreet Boys tonight, but he’s experiencing a flare-up of his back injury and had to call in sick.

Instead, he sat around trying to take the pressure off of and combat the pain. I read a book.

I’d woken up with a few things I felt I needed to say about the season that ended so abruptly last night. They were mainly expressions of pride and gratitude and I needed to get them off my chest. So many people work so hard to make our season happen and I really felt like I needed to draw some attention to a few names that sometimes go unnoticed. 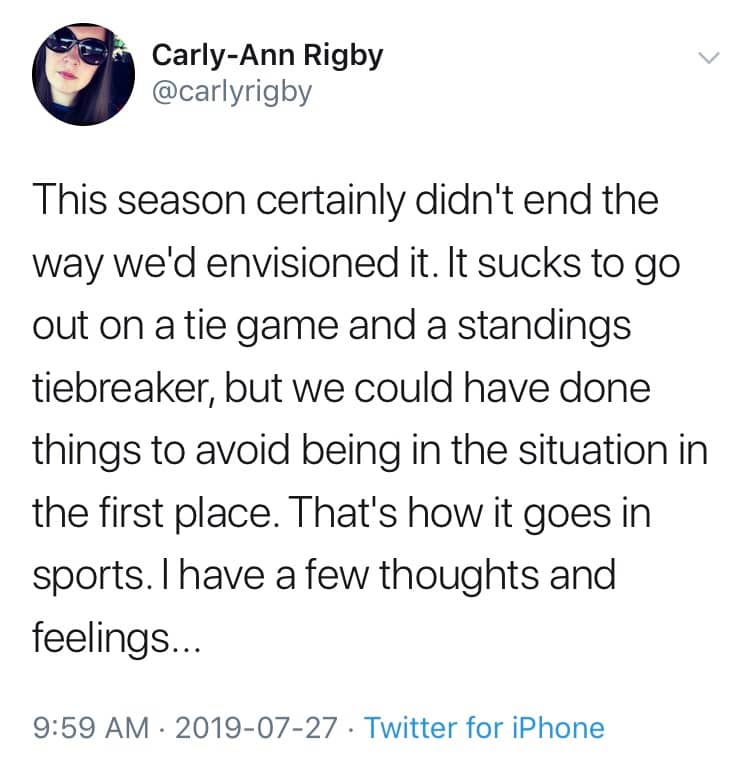 It’s funny because I was fine when I wrote them all, but when I read them over after I was done, I couldn’t stop crying. Not out of sadness, but if gratitude. And then I started getting messages from players and other staff. ????

Interestingly, almost immediately after I’d finished posting, a Twitter friend expressed the same cheerleading tendencies as I’ve identified in myself. He started by saying, “Dammit, I just want to root for people! Supporting and encouraging is what I want to do.” Here’s where he got started. We riffed for a while about how that can be perceived as having ulterior motives and how sometimes it can be exhausting. We agreed to work as one another’s support systems in times when lose sight of the end goal. It feels good to have someone who comes from the same place.

Later in the day, we decided to try to take a stroll through the big Columbia StrEAT Food Truck festival. We didn’t last long. It’s right outside our apartment and we walked a couple of blocks, but it was busy and the lineups were so long and neither of us were willing to A. wait or B. compromise our eating guidelines. (I’d joked that we could go there and eat our feelings, but when push came to shove it was all talk.)

Between being sore (Kevin) and annoyed (me) we weren’t into the scene so we came back home about twenty minutes later with groceries in hand.

Now we’ll probably take in some tv and call it a night. Back at it tomorrow.

Sports can break your heart