Top Posts
23 for 2023: things we’ll do this year
What should I focus on on in 2023?...
Milk Fed
My Happiness Project: February
Be your own historian
Post-vacation blues
Bad habits
Home alone
What’s going on in your community?
Quick turnaround
Home TDTFYH Toronto – day five
TDTFYHTorontoTravel

We got to sleep in this morning and we even had a little extra time to explore our hotel and have some lunch.

I loved the Fairmont Royal York so much. My only regret is that we didn’t have more time to get it know it better.

The hotel was initially built beginning in 1928 and opened on June 11th, 1929. At the time it was the tallest building in the British Commonwealth.

For a hotel that old, they’ve done an amazing job of balancing the original designs with renovations and restorations. 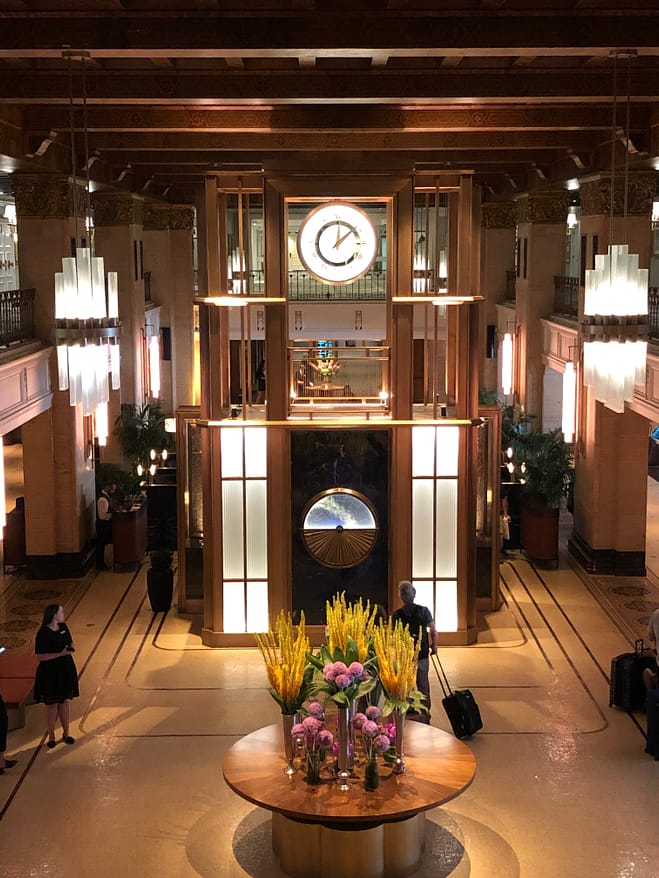 I’d deliberately put off reading about the hauntings throughout the hotel until this morning because I didn’t want to freak Kevin (and maybe me) out. There seem to be three established hauntings in the building. One is a former porter who worked at the hotel and hung himself, another is a man wearing purple and wandering the halls. The third is children heard laughing and running up and down the halls. Obviously, we didn’t seen any evidence of the hauntings, but we did get to check many of the grand old rooms throughout the large property.

The second photo is from inside the Concert Hall. I walked in and it was dark, then after standing still in awe of its beauty for 15-20 seconds, the lights came on. The photo doesn’t do justice to just how gorgeous a room it is to be in. I can just imagine it’s much more splendid during an event.

One place that I insisted we take a look at before we leave was the Library Bar, for obvious reasons. It was our final stop and while we still had about thirty minutes before we had to leave, Kevin convinced me we should have a bite to eat while we were there.

The staff there were so great once they knew our time constraints. Everyone works too get us fed and out the door on time – and it was a success!

In a reversal of our arrival on Friday morning, we took the UP train back to the airport and were on our way back home without a hitch.

As always, coming home is bittersweet. I am pretty miserable about it, but I was at least a little bit happy that we got to see the cats.