Top Posts
23 for 2023: things we’ll do this year
What should I focus on on in 2023?...
Milk Fed
My Happiness Project: February
Be your own historian
Post-vacation blues
Bad habits
Home alone
What’s going on in your community?
Quick turnaround
Home TDTFYH Be your own historian
TDTFYH

When I got a text that said, “You came to see Valerie Harper with me and my sister, didn’t you?” I knew what that meant. I immediately felt that she must have passed away, but I waited for that confirmation text that came minutes later.

Yes, I’d gone to see Valerie Harper with my friend Rebecca and her sister, Ginnie. It was Ginnie’s idea because after a handful of meetings, we’d stumbled upon our mutual love for the Mary Tyler Moore Show and, especially, the spin-off, Rhoda.

When Rhoda’s appearance in Vancouver was announced, Ginnie orchestrated our trio’s attendance and we all relished the life experience she was so willing to share. It felt like we were in the presence of a true icon.

We continued to text back and forth last night – about that event, about the cancer she’d survived and about her death. At one point Rebecca said, “that was a while ago.” She was right, but I couldn’t put my finger on when. It could have been as long as a decade and, honestly, it could have been longer.

I looked through my Instagram feed because I’d secretly stolen an illegal and crappy camera phone picture of Valerie Harper sitting on stage. Turns out, I didn’t post it.

I tried to google Valerie Harper appearances in Vancouver, but as always when a rush of articles pop up after a famous someone’s death, there was no way to cut through the news articles.

Finally, I thought I must have tweeted something about it so I entered the perfect coordinates to find my way back into the search bar: Valerie Harper @carlyrigby.

The first was the requisite article leading up to the event (here’s a link to the tweet.)

The second was a celebration of the night we’d had (here.). 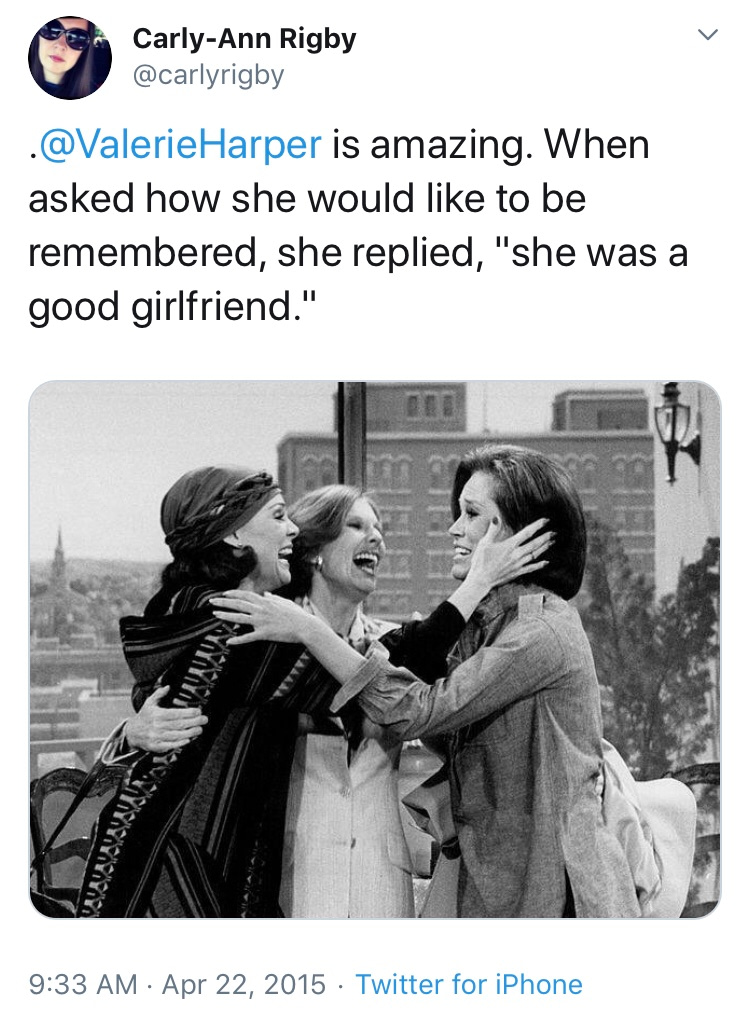 It felt victorious that I was able to finally put my finger on when we’d done that. As you can see, it was April 2015 when we saw her, almost 4.5 years ago.

I felt a rush of gratitude that I have tweeted so much of what I’ve thought, seen and done over the years. I found a new appreciation for how I’ve been documenting my life without fully recognizing that it’s what I’ve been doing. As much as I’ve wanted to be someone who journals, it’s just never stuck and my feelings about calendars has varied over the years. Sometimes I’m into keeping them, sometimes I’m not.

I started to notice earlier this year that my historical information wasn’t being saved in my Apple calendars and it made me kind of sad, but also kind of annoyed. At the time of discovery I’d been looking for some somewhat important medical timelines and because I couldn’t search the appointments, I couldn’t put a finger on when they’d occurred. I can’t remember how I eventually sorted it out – could have been a clue on my blog or perhaps email – but I did while at the same time becoming aware that I needed a better process. I want to know what I was doing on this day last year and all the years before that. I also want to be able to tell when it was that I did a thing.

In the meantime, since that realization, I hadn’t actually done anything about it. This morning, in a fit of brutal honesty, I admitted that as much as I love paper, that wasn’t going to be where I could keep up a personal history. Notes? Yes. Sporadic thoughts? Yes. Strategy? Yes. But not records. I get too bored too fast to keep up with the same thing for more than a few days at a time.

Knowing that I wanted more, I started by searching diary apps. I thought that if I could have someplace I could write, save photos, video and voice memos, that would be ideal. I want the freedom to add as much or as little as I want. I want to be able to search it and I’d like to be able to download it as well. I relied on this article for guidance in where to look and I’ve actually decided to try using three different apps to see which one I like the most. I’m trying Day One, Penzu and Momento.

I’ll let you know how it goes.

How are you the historian of your life? How do you keep a record of your adventures?